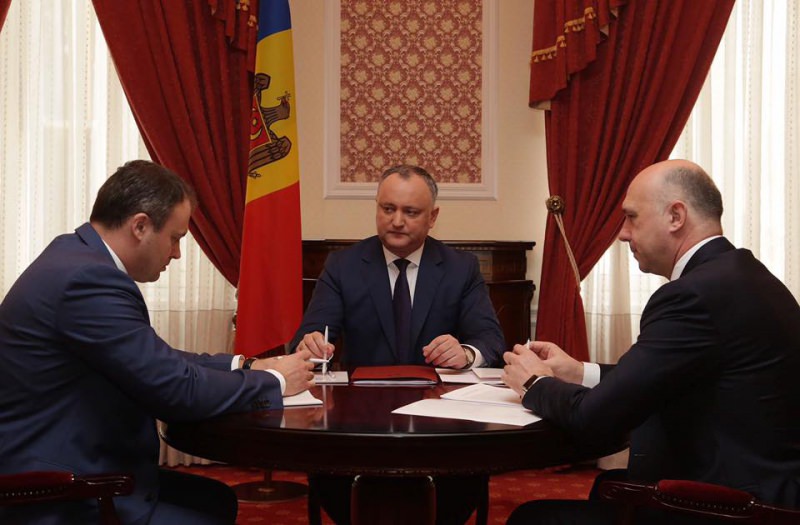 President of Moldova Igor Dodon met today with Parliament Speaker Adrian Candu and Prime Minister Pavel Filip, during which they discussed issues on the political, economic and social cohesion in Moldova, including in the context of spring-summer parliamentary session and the possible actions to be taken in the upcoming future on behalf of each institution.

The Head of State announced that the meeting was an attempt to get a minimum dialogue between the state branches, and namely: Government, Parliament and Presidency.

At the same time, Igor Dodon noted that sides had had diametrically opposite positions on some issues of principle, but are obliged, as official representatives, to identify some social solutions for the benefit of citizens.

"Patterns I insist upon and towards which we have absolutely different views are:

– negative consequences in economic and social terms of the Association Agreement with EU. I mentioned that any geopolitical orientation can have full legitimacy only if approved by citizens in a referendum;

– signing the cooperation agreement with Eurasian Union. I announced that I intend to sign this agreement already on 03 – 04 April 2017;

– triggering early parliamentary elections as soon as possible. I announced that I would come up with the initiative to amend the constitution to boost presidential powers in that regard at the beginning of next week;

– abolish law on putting on citizens’ back the stolen billions. I reiterated that I would do everything for people not to pay a penny to repay the stolen money;

– renunciation of opening NATO office in Chisinau and negotiate with the North Atlantic Alliance for an agreement of recognition the neutrality of Moldova".

At the same time, Igor Dodon said that there were certain subjects that officials agreed to undertake joint actions:

"– reintegration and Transnistrian conflict settlement – here we agreed to create a common platform of experts and officials from Presidency, Parliament and Government to advance in the given topic;

– I proposed several solutions to increase substantially the amount of pensions. I set out the vision of Presidency on financial possibility, we agreed with all to be absolutely necessary to find a solution;

– increase of the agricultural subsidy fund. I conditioned the promulgation of finding solutions to increase financial allocations for farmers. I proposed several options that we agreed to examine in common," the President said.

According to the President, today it was put a beginning of the dialogue, even if contradictory, expressing hope that it would continue, at least on some social and economic matters, for the benefit of citizens who should not suffer because of political confrontations.