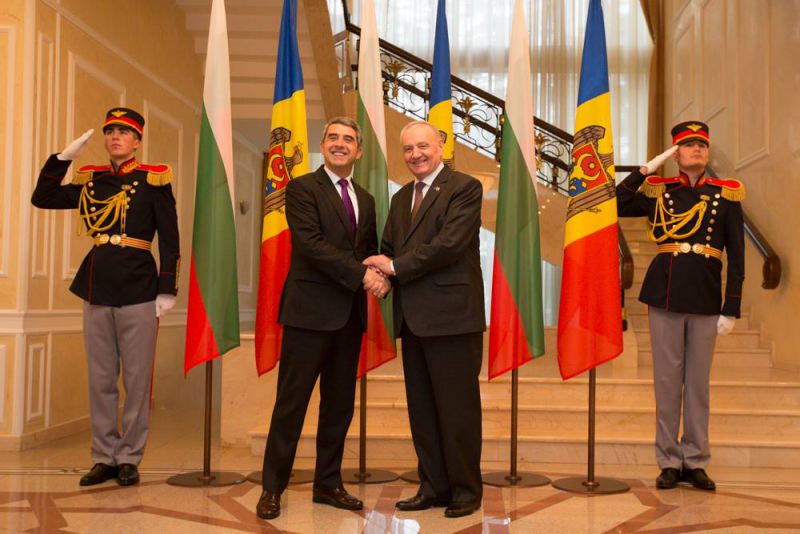 Moldovan President Nicolae Timofti received today, on 15 November at the State Residence, Mr. Rosen Plevneliev, President of Bulgaria, who is on an official visit in our country at the invitation of the head of state.

The two officials had a bilateral meeting followed by talks in expanded format with the participation of delegations of Moldova and Bulgaria.

"I came in the last days in the Presidential office in order to thank you for the correct work which you have promoted and to shake hands with you as a friend and politician whom I respect exceedingly," said President of Bulgaria Rosen Plevneliev.

"We are close peoples, have much in common, but we recognize that you managed more than us once you became the European Union (EU) and NATO’s member," said President Timofti.

On the occasion of the visit to Moldova, President Nicolae Timofti awarded his Bulgarian counterpart with the Order of the Republic, conferred by presidential decree earlier.

At his turn, the Bulgarian President granted President Nicolae Timofti the Order Stara Planina of the Republic of Bulgaria, the highest award of this state.

Later, the Moldovan President and the President of Bulgaria made a joint press statement, which transcript is presented below:

Moldovan President Mr. Nicolae Timofti "Dear Mr. President, Dear journalists, I would like to welcome the delegation of the Republic of Bulgaria in Chisinau, led by President Plevneliev.

We are grateful to President Plevneliev for accepting the invitation and welcome the official visit to Moldova.

A visit is significant for us because it occurs on the eve of celebrating a quarter century of diplomatic relations between our countries.

Relations between our peoples are not only pragmatic and constructive but also marked by warm and friendly feelings, built over the centuries.

Current visit is part of the agreed under my visits to Sofia in 2014 and this summer, being a great opportunity to discuss in a frank and cordial manner the main objectives of the bilateral agenda. We want relations between our countries to be geared towards creating favorable conditions for enhancing cooperation in all areas.

A separate topic of today conversation was the situation in the region and, of course, the elections of new heads of state both by us and the Republic of Bulgaria. The other day, in both countries, were held presidential elections.

It is deeply symbolic that those took place during the visit of President Plevneliev. Through our meeting today, we want to send a symbolic relay of our traditional friendship to the elected Presidents.

I am convinced that regardless of the political presidents and our governments, bilateral relations will always be excellent.

Moldova and Bulgaria develop a substantive dialogue on multiple levels.

Between our countries, there are no issues and problems that could overshadow bilateral relations.

We are confident that Bulgaria will remain an active supporter of Moldova to continue the dialogue with EU structures.

We talked also about the economic component of the Moldovan – Bulgarian relations and the need to implement agreed in the intergovernmental commission for economic cooperation, which took place this spring in Sofia.

We reiterate on this occasion the Bulgarian market opening for our business. Also advocate for enhanced cooperation in agriculture, transport, tourism and public health.

We also, develop traditional relations in education, science, and culture. On this occasion, I would like to highlight and thank the authorities in Sofia for scholarships granted to our citizens, including Bulgarian origin, and prepare teachers for educational institutions in Moldova.

As I said, the Diaspora factor has always been an important element in relations between our states.

In this regard, I discussed with Mr. President Plevneliev about improving the mechanisms supporting the nationals established in Moldova and Bulgaria.

Respect for minority rights and creating conditions for preservation and development of their ethnic identity is a constant concern for our authorities.

Among the Bulgarians in Moldova, there are many outstanding people in various spheres of socio-cultural and economic aspects of the country: scholars, musicians, economists, teachers, doctors, writers, painters, leaders of companies and state institutions, entrepreneurs who, through their hard work, contribute fully to Moldova's prosperity, strengthening of interethnic relations in Moldova and support friendly relations between Moldova and Bulgaria.

In a sign of high appreciation for the substantial contribution to the development of relations between our countries and peoples, but also of respect and admiration for the person of President Plevneliev, we offered to this gentleman, as you saw your bystanders, the Order of the Republic and thank him for accepting this state award of the Republic of Moldova.

However, I was particularly honored to receive the Order Stara Planina of the Republic of Bulgaria from Mr. President Plevneliev.

Thank you for your attention!"

President of the Republic of Bulgaria, Mr. Plevneliev: "Dear Mr. President, dear friends, ladies and gentlemen, thank you heartily for the warm hospitality we have received. I had previously dozens of meetings at international events, context in which we have built a strong friendship with President of Moldova. We share the same values, work for peace, democracy, and human development. Relations between our countries are also relations between me and President of Moldova: peaceful, friendly, with deep historical roots and a great future.

Let me congratulate you on the anniversary of 25 years since Moldova's independence, express my satisfaction that the presidential elections have passed peacefully and democratically. With pleasure, we see positive dynamics which are already traditional between the two countries. Moldova is a close friend of Bulgaria.

I am proud that Bulgaria is a friend of your country, which consistently and firmly supports the sovereignty, independence and territorial integrity of Moldova. We support international efforts to solve the Transnistrian conflict. Decisively reject any attempt to separatism and violation of the sovereignty and territorial integrity of Moldova. I would like to reaffirm Bulgaria's constant support for Moldova's European integration course.

I would like to express my satisfaction that reforms advancing in Moldova, which is an encouraging sign for the irreversibility of the process of integration.

I am so proud that I, as President, and Bulgarian authorities have unconditionally supported Moldova in the process of visa liberalization, I participated in laying the foundations for the Eastern Partnership to deepen the partnership between Moldova and the European Union. I would like to share my hope and the entire Bulgarian people that this integration process will continue and we will give you the necessary support in this endeavor.

I give you a few figures about Bulgaria. In 1997 we decided to start the integration of Bulgaria into the European Union. Since then our economy has quadrupled, i.e. 400 per cent pensions, 300 percent investments in education and health care, three times each. Foreign investments in Bulgaria reached 40 billion euros. Thus, the company was committed to democracy, prosperity, and peace. We, Bulgarians are very proud of what we have achieved in European integration process, which instilled confidence in us, certainly, foreign investment, human and economic development. We want to share these successes with you, to support you, to encourage you, to be there.

I am convinced that Moldova will continue to make the necessary efforts to protect the rights of minorities in accordance with European standards. Thanks to the positive attitude of the Bulgarian community in Moldova, the development opportunities offer. We particularly appreciate the Moldovan institutions on policy to preserve national identity, culture, and language of this community. We hope that in the case of a territorial-administrative reform, Taraclia will keep its status.

We are grateful for the support of the Moldovan authorities on the opening of a Bulgarian consulate in Taraclia. Extending the Bulgarian diplomatic presence will help improve consular servicing of Moldovan and Bulgarian citizens, stimulate investment and increase trade.

Bulgaria is the regional leader in ICT. In this area, we have created tens of thousands of well-paid jobs. I talked to Mr. President to encourage Bulgarian companies in this field to come here to find professionals to capitalize thus more successes together. We highly rated companies in pharmacy and production of medicines, energy, food production, an area in which Moldova has potential. Together we can do more.

Also, I am grateful and I designed already an initiative, together with the Moldovan authorities, the reorganization of the State University "Grigore Tamblak" in Taraclia, into a subsidiary of an institution of higher education in Bulgaria.

This new status will allow the university to expand the number of existing departments, will mean also issue diplomas recognized across Europe and will help integrate young people into the European education system. This will make the university more attractive. We hope that this process will be carried out.

Cooperation in all areas where we support each other, we are friends and we will be friends from now on. I would like to thank you once again and to say that peace and stability in the region depend on us and we guarantee it.