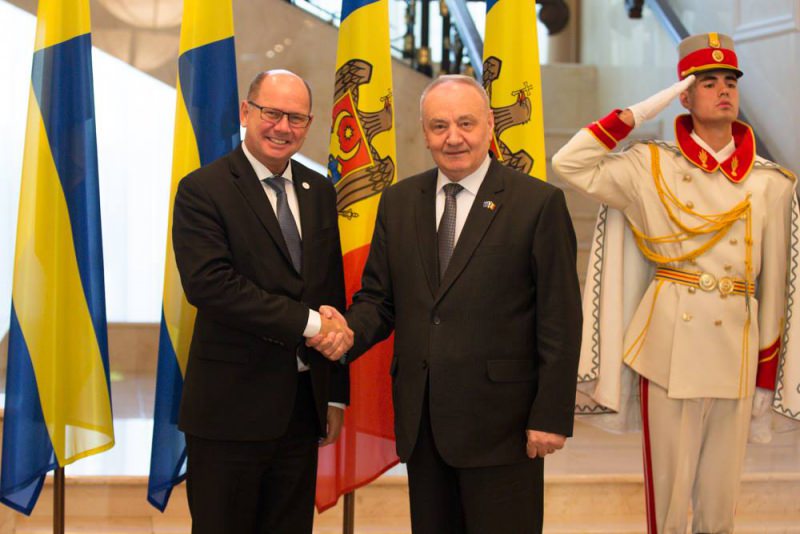 Moldovan President Nicolae Timofti received today the Speaker of Parliament of the Kingdom of Sweden Urban Ahlin, who led a delegation of MPs representing different political groups in the Riksdag in Stockholm, the presidential press service has reported.
President Nicolae Timofti and the Speaker Urban Ahlin discussed issues related to the Moldovan-Swedish bilateral cooperation, the presidential elections in Moldova by the end of October, the regional security and Russian propaganda impact on Moldova’s territory within the current election campaign.
The head of state expressed hope that the future elected president would continue promoting and achieving Moldova's European path, noting that our state had the necessary deployment and fair elections in accordance with European standards.
President Timofti thanked Sweden for EU and its member states support during the embargo imposed by the Russian Federation, used as a method of pressure before signing the Association Agreement and Deep and Comprehensive Free Trade Area between Moldova and EU. "EU is our main market for exports which are oriented in a proportion of about 70 per cent to EU countries," said the president of Moldova.
When asked about the subject of ethnic and national identity, President Timofti said that every Moldovan citizen has the right to self-identification, stressing that a nation has to remember the sources, because the future does not belong to those without past.
Swedish Parliament Speaker noted that Sweden supported Moldova since Independence and would continue this approach for the time to come. The official stressed the importance of maintaining Swedish chosen direction and the positive results derived from the reforms which were started.
Referring to the Transnistrian issue, the parties agreed that resolving the two conditions can be determined by two basic principles: dialogue and respect from the Russian Federation for smaller countries and their national interests.