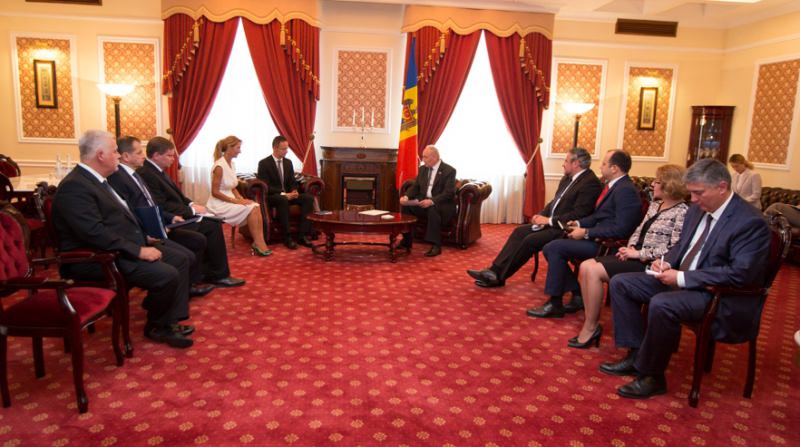 President Nicolae Timofti today has received Hungarian Minister of Foreign Affairs and Trade Peter Szijjarto, on an official visit to Moldova.
The head of state praised in the dialogue, promoting the interests of Moldova's European integration by the Hungarian diplomacy, pointing out that Moldova counted on similar support in continuation.
At the same time, the head of Hungarian diplomacy said that the Eastern Partnership was a priority for Hungary, and progress made should give Moldova possibility to integrate into EU in the near future.
"The enforcement of the Roadmap at a 90- percent level is a result worth being respected. Hungary supports the unlocking and resumption of the European financing for Moldova," said Peter Szijjarto.
President Timofti said, in this context, that Moldova had made the right choice by opting for European integration. "Presently, our economy is closely linked to the European Union, the trade ties with the member states accounting for 65 – 70 per cent. Most of our citizens declare for integration, despite pressure and obstacles from abroad," said the president.
As for the Transnistrian file, the foreign minister of Hungary stressed that his country supported the reestablishment of territorial integrity of Moldova; as far as  the national minorities' subject is concerned, Moldova can be a model of organization, from which EU can take example, as quite a few European democracies offer autonomy to an ethnic minority.
In the end, the president reiterated that the rights and freedoms of Moldovan citizens from Transnistria, regardless of ethnic affiliation, were violated by the Tiraspol illegal regime.