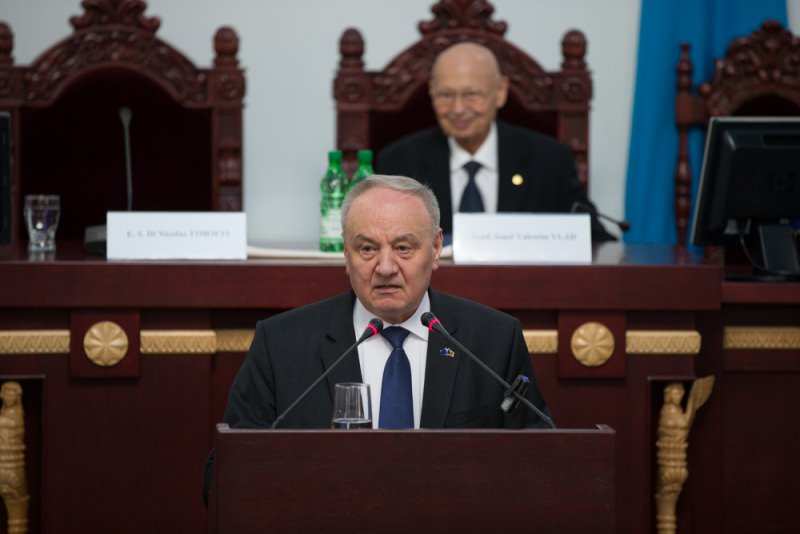 On the occasion of national holiday "Limba Noastra cea Romana" (Our Romanian Language), Moldovan President Nicolae Timofti today held a public lecture "The Romanian language, politics and rule of law" at the Academy of Sciences of Moldova.

In his speech, the President stressed that the circulation of the two names of the same language means the Moldovan society continuous splitting and of Constitution Article 13 amendment would be an act of political and legal correctness of Parliament.

"We are ethnic Romanians, although we call ourselves Moldovans. Let us assimilate and accept this truth once and for ever, and let us deal with other things that require effort and concentration," said President Timofti.

We present the lecture text, sustained by the president, at the Academy of Sciences of Moldova:

"Dear Mr. President of the Academy of Sciences,

Honourable Members of the Academy of Sciences,

I am pleased to be here today, on 31 August 2016, here with you in this important day in the history of our young state. Moldova is among the few countries in the world that has a national holiday dedicated to its language. Undoubtedly, it is a joy. At the same time, history and reasons behind the decreeing they reflect the dramatic destiny of our nation. Feast dedicated to the Romanian language appeared as a natural reaction of people to the injustice which was done over the centuries. From 1812 to 1989, the imperial policies, part of which was our territory, did not allow the Romanian language at all levels of social and political life. This historical fact can not be disputed. Exception of the nearly two centuries made the 22-year period, from 1918 to 1940, when the present territory of Moldova was part of Romania administrative structure of the state and the Romanian language was naturally manifested as a state language.

We know, and you know yourselves better than anyone that the fight to restore the Romanian language in its natural track could never cease, with periods of active and dormant periods. I will mention here the ardent struggle of Alexei Mateevici in the early twentieth century. He and his brothers had a decisive impact in the process of revival of national consciousness of Moldovans and unification of forces in order to break the shackles of the Russian Empire. His poem “Limba Noastra” (Our language) nowadays urges us to be consistent in the way of returning to our values of identity, to develop. Only by leaning on their hard ground, on our spiritual granite, we can build something sustainable, we can withstand the challenges of any kind. This poem that became the anthem of the Republic of Moldova is further proof that the Romanian language, our national language, is one of the columns that support our ethnic identity.

History of the twentieth century is marked by social and political experiments, tragic wars and human sacrifices. Our territory has always been a place of interests of great powers. Often it was used as a field of geopolitical battles. Most times, neither people here, nor politicians who were supposed to represent them, were asked what they wanted. Their options did not enter into the plans of great powers. The population here served the Soviet empire guinea pigs in laboratories. It is known that Stalin's policy came in the sphere of language. His experiments on the formation of autonomous entities, as Moldavian Autonomous Soviet Socialist Republic, as then experiment by imposing a "new literary languages", which was supposed to legitimize the existence of ethnic identity of Moldovan nature different from the Romanian one. Echoes of those policies are felt today. Geopolitical experiences of totalitarian system laboratories maimed destinies of millions of people. Our fellow citizens had to pay tribute to the blood not only for their political and ideological, but also for their spiritual and national ideals. We recall in this context, the Transnistrian intellectuals who were shot in one night, being falsely accused of treason. Their right to write in Romanian, to access the Romanian classical writers’ creation they withdrew, without appeal, in a single day. Just as in 1940, Moldovans became illiterate overnight, and forbade the Romanian alphabet and forced them the one foreign Russian language being their most. All these moments in our history prove the importance of language to support the national consciousness. Mother tongue is the one that sets you free, where you are at home with your family, wherever you are. Therefore, on its altar of persistence and return to normality, there were made sacrifices, that we ought to keep in memory.

I would also remind, the historical the IIIrd Congress of Writers of the Moldovian Soviet Socialist Republic, held on 14 – 15 October 1965. Then, it was again put the issue of the literary language, returning to normal garment of our language, the script based on the Latin alphabet. A special role at the Congress had had interventions of writers Ion Druta, Aureliu Busuioc, Mihai Cimpoi, and others to take more than two decades as intellectuals to rise again and to accomplish the battle that lasted years, decades, centuries.

Experiencing the U.R.S.S's restructuring in the years 1988-1989, the Moldovan society put on historical truth track and reinforced in the center of socio-political and cultural issue of national history, language, culture, ethnicity. It is our homage to the creative intellectuals and scientists who were and that time the forefront of the national liberation movement. I remember the names of only a few personalities who, unfortunately, are no longer among us: Ion vatamanu, Lidia Istrati, Valentin Mindicanu, Grigore Vieru, Dumitru Matcovschi, Leonida Lari, Nicolae Corlateanu, Ion Dumeniuc, Silviu Berejan, Constantin Tanase Anatol Ciobanu. Do not forget these devoted sons and daughters of our nation! Let us remember the dignity and honesty. They put their talents and creative energies on the altar of the Romanian language.

National revival meant for Moldovan citizens fighting for "Language" and "Alphabet". I use these two deserve exactly the formula cheers of those memorable years when the National Square was like a sea of souls thirsty for truth, freedom and democracy. On September 17, 1988, more intellectuals, writers, scientists, educators, men of culture – published in public education newspaper columns,  historic open letter, etc.

The Declaration of Independence of the Republic of Moldova, approved on 27 August 1991, taking into account the opinion of writers and linguists, the scientists from other fields of science, followed by the support of thousands and hundreds of thousands of letters over the years from 1988 to 1989 came from Weekly Literatura si Arta (Literature and Art) newsrooms, public education, the chants of hundreds of thousands of citizens from the Great National Assembly Square in Chisinau.

So Moldovan Declaration of Independence, approved by Law no. 691 of 27 August 1991, confirms the Romanian language as a state language, "recalling that in recent years the democratic movement of national liberation of the population of Moldova reaffirmed its aspirations for freedom, independence and national unity, expressed in final documents of the Great Assembly national in Chisinau on August 27, 1989, December 16, 1990 and august 27, 1991 by the laws and decisions of the Moldovan Parliament on the establishment of Romanian as a state language and reintroduce the Latin alphabet, August 31, 1989, the state flag 27 April, 1990 , coat of arms, November 3, 1990, and changing the official name of the state, May 23, 1991", etc.

I confess that my intimate conviction, my attitudes have always supported scientific truth. One of the primary texts in this regard was and is the answer to the request of the Moldovan Parliament on the history and use "Moldovan language" (the Academy’s specialists-philologists, accepted the extended session of the Presidium of the Academy of Sciences) of 1994 which clearly said that "literary language, the written primarily used in decades in Moldova, as the one which wrote all our ancestors, is Romanian."

After almost three years, on 5 December 2013, the Constitutional Court decided on the basis of the Declaration of Independence and the scientific conclusions of the Academy of Sciences of Moldova, permanently and irreversibly, the correct name of the state language, the Romanian language.

I quote from the text of the judgment of the Court:

Maintain the ambiguity and duplicity, fueled by new hostile forces is inadmissible. Further circulation of two names of the same language means continuous splitting of the Moldovan society. The one who does not understand this, is against the development of our state. We can not continue on the path of advancement of falsehood. Long hesitations supposed to end like this. We are ethnic Romanian, although we say Moldovans. I remember, in this context, the opinion of a renowned linguist, the universal value of the illustrious scholar Eugen Coseriu, our earthling who believes that Moldovans are part of everything related to Romania. If we identify as Moldovans, we naturally are Romanians, then. This is our identity, as ethnic, historical, cultural and linguistic diversity, etc.

At the anniversary, I urged all citizens of the Republic of Moldova not deviate from our path, to strictly follow the European vector of development. Our state was committed to restructuring and democratization, with popular European countries. Here we must concentrate forces:

- To have a competitive European level education;

- To have a system of scientific research and innovations fully connected to the performance level of EU;

- To have a system of healthcare and social protection suit current needs of our citizens;

- To have a professional and honest judicial system citizens can trust;

- To put the economy in operation, according to the models of countries that have had the wisdom, character and strength to overcome crises and transform them, finally, in favour of their nations;

- To bring back citizens' trust in the state!

However, to be demanding political class, to ask the plenary to serve the public commitment they bring to power, remember that vowed to serve the interests of the country, but not to the opposite!

We still have much to do. All the hardships undergone by our state in these 25 years can and should be overcome by unity, by uniting all healthy forces: political class, administrative factors, scientists, men of culture, civil society – all people of good faith – in our joint work to make Moldova a prosperous state, to be proud of and where citizens want to live, to bear children, to feel fulfilled destiny.

I direct most cordial congratulations on the occasion of the twenty-five years of independence of our state!

We sincere good wishes on the occasion of the highlighted National Holiday – Ziua Limbii Romane (the Romanian Language Day)!

Let us be proud of our ancestors to honour their mind and deed, we bring to fulfillment ideals!

The Romanian Language to last – our spiritual being home!

Thank you for your attention!"