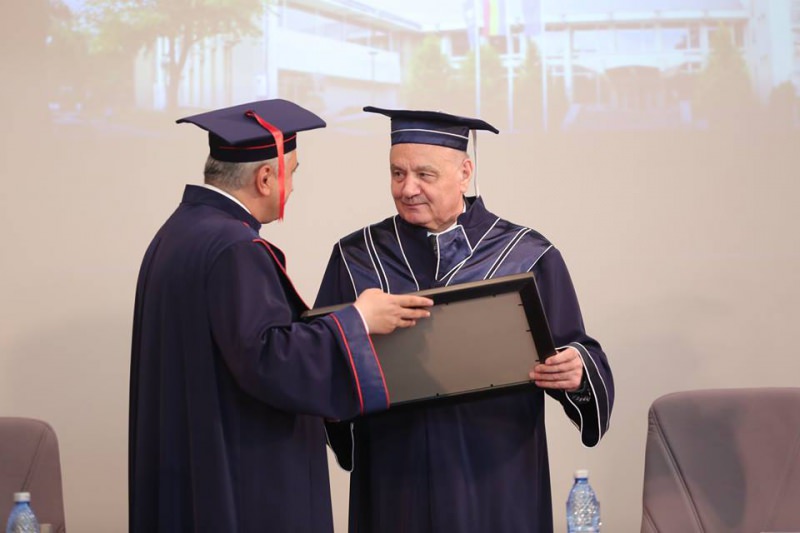 The following are excerpts from the speeches of the two presidents:

I regard this title, which was offered to me so kindly by the Stefan cel Mare University, as the expression of the ancient ties, enshrined in our hearts, contrary to administrative borders, abusively set over our common past.

The Republic of Moldova, whose president I have the honour to be, has only one chance to modernise and secure sustainable development. This is integration into the European Union.

Moldova’s luck is that it has Romania by its side, a member state of the European Union, which increasingly asserts itself as an important pillar of stability and security in this region.

Moldova’s path to Europe goes through Romania. The routes on which information, ideas, concepts and values circulate must become no less important than the physical highways that will connect Moldova and Romania.

We must demolish the administrative and economic barriers that impede access of TV channels, movies, computer programs and applications in Romanian, Romanian pop culture expression and others to Moldova.

I am sure that one day, sooner or later, we will all meet again in the European Union.

The border on the Prut River will represent a mere formality. We will move from Chisinau to Suceava on a modern highway to visit our grandchildren, students and teachers at the Stefan cel Mare University.

Fighting corruption, economic stability and the strengthening of institutions represent the only way of success. I say it again: Moldova has a great chance which we did not have at the time of accession. This opportunity is called Romania, a full-fledged member of the European Union, the present most powerful supporter of Moldova in the process of integration.

Moldova’s current justice system bears the mark of its distinguished leader, by the promotion of law reform. The skill and accuracy he always showed, the impact of his personal example and sense of duty have played a key role in his self-assertion on the public stage and the trust he managed to win from his citizens is a confirmation of his virtuosity. Mr. Timofti’s determination and courage to lead the country towards European integration is certainly a model for other countries of the region. He was also fully involved in turning into account the statute of membership of the Eastern Partnership for the fulfillment of the European destiny of Moldova.