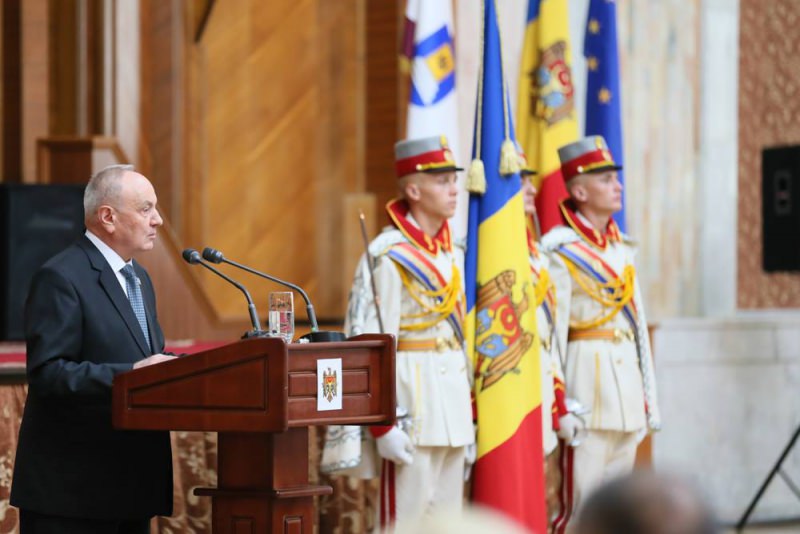 The event was organized by the Moldovan Parliament and the Constitutional Court of Moldova, in a solemn atmosphere, at the Palace of the Republic.

We present the speech by President Nicolae Timofti:

Mr. President of the Constitutional Court,

Judges of the Constitutional Court,

Dear First President of the Republic of Moldova,

Today, in a solemn atmosphere, we mark the 22nd anniversary of the adoption of the Moldovan Constitution, which has expressed starting from the day of 29 July 1994, the quintessence of a young state identity, at the beginning of the road of independence and sovereignty. A state that wanted to be unitary and insightful in aspirations of democratization and modernization of the political system which  detached itself, for only four years, from the totalitarianism nets.

The Constitution Day is a special occasion to gather our thoughts on the fundamental values of a democratic, open society, in which the word of the Law and not the law of the word should dominate. The observance of the Constitution, carrying out of the political, legal, social processes within the margins of constitutionality represent the best card of the Democracy.

The Constitution is a symbol and the main attribute of the statehood, sovereignty and independence. It guarantees the inherent rights of the human nature: the right to life, freedom, security. Only a Constitution based on the construction of the rule of law state allows us to put into application our intelligence, talent, and not quarrel with our own conscience.

The Constitution of the Republic of Moldova is the Fundamental Law of the country, which enshrines the people as the holder of sovereignty, with the sovereignty is expressed by the will of the people.

The Moldovan Constitution had as source of legality, but also as an expression of century-old aspirations of our people, the Declaration of Sovereignty and the Declaration of Independence of Moldova. The deputies of the Parliament of the '90s, plenipotentiary representatives of the people, as stated in the preamble of the constitutional text, noted the fact that they are aware of their responsibility for the generations past, present and future. Thus, the Constitution embodies the national dignity of our people, devotion to the generally-human values, wish to live in peace and understanding with all peoples of the world, according to the generally recognized principles and norms of the international law. By the Constitutional text, the Republic of Moldova pledges to respect the Charter of the United Nations and the treaties it is party to.

The Constitution of the Republic of Moldova presently stipulates sufficient decisions  and guarantees for democracy find itself in a hegemonic situation. It places into the field of legality the democratic mechanisms, such as voting or the organizing and functioning of public authorities, transparency, equal opportunities and equal rights, civic peace, human dignity, rights and freedoms, free development of personality etc.

A further guarantee of constitutional democracy is the principle of separation of powers, which comes from the way of regulation of the three powers – legislative, executive and judicial. None of the powers can submit or make interference to each other. And if our political reality makes us suspect, sometimes, the observance of this democratic and constitutional paradigms, do not look for omissions in the Constitution, but the morality of the society as a whole.

A reflection of the genuine democracy is represented in Article 5 of the Constitution, which enshrines political pluralism incompatible with dictatorship and totalitarianism. No ideology can be established as the official state ideology. The only "ideology" (I say it in quotation marks) that we need is the one of Tolerance and Compassion!

The Constitution is not something immutable, it must reflect political and social developments in society. But, at the same time, the constitutional reforms must correspond to moments of utmost importance in the history of the modern state Republic of Moldova. The Constitution must be witness of historical changes in the destiny of a nation, but not a field of competitions for political and conjuncture interests.

The constitutional reform from 2000 and the one of 2016, both evoking Article 78 of the Constitution, must be a lesson in this regard. A political constitutional system can not withstand multiple backstage games. Let us not forget that, even comma, when improperly placed in the Constitution text, can bring big troubles  to a nation. Therefore, politicians should consider the voice of the people, the people's right to self-determination, for it is the truly sovereign.

"Moldova is a sovereign, independent, unitary and indivisible state"– it is the first paragraph of the first article of the Constitution. It must be the sacramental oath of those who represent the constitutional authority in the state, supported by the whole nation.

Moldova made an important step, on 27 June 2014, when signed the Association Agreement between Moldova and the European Union. What I wish, with sincere feelings of accomplishment, me personally, you, those present here today, as well as all citizens, is that an element of novelty appears in the Fundamental Law as soon as possible. An article with district title, Integration into the European Union, the preceding moment of which should be the deep institutional and civil conscience reforms.

On the occasion of the 22nd anniversary of the adoption of the Moldovan Constitution, I convey all those present here and to all citizens sincere and cordial congratulations, along with wishes of prosperity. And we should always find constitutional solutions to all crises due to put to test the resistance of a democratic regime, that would meet the future aspirations of our society.