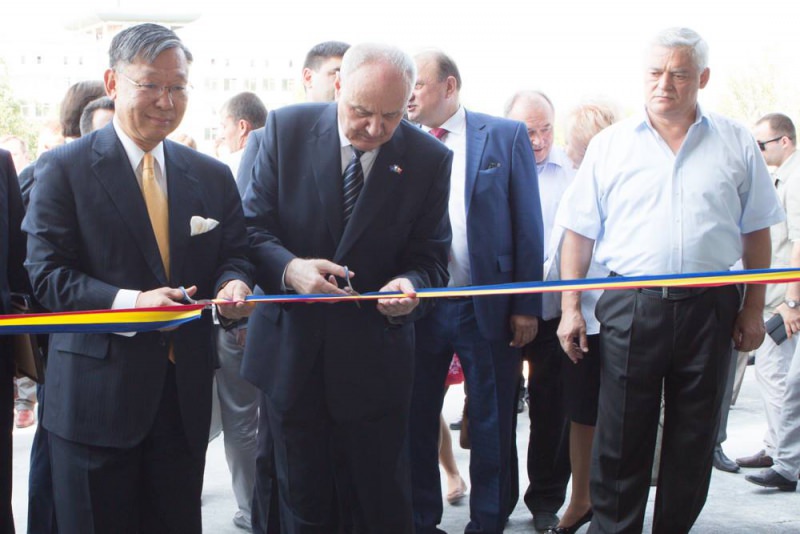 The project was implemented with the support of the Japanese government, within the assistance programme for unprivileged farmers, 2 KR.

Timofti delivered a speech at the event, highlighting that the 2 KR programme, which marks 15 years since its launch, was one of the most successful and efficient programmes implemented in Moldova.

„Fifteen years ago, in a difficult period for the Moldovan agriculture, we bought, with funds generously provided by our Japanese partners, tractors, combines, watering pots, irrigation equipment, various agricultural devices, with the help of which the Moldovan agriculture got on the way of performance. So far, the Japanese government has provided financing, via 11 grants, in amount of over 37 million dollars in all,” Timofti said.

Referring to the above-mentioned factory, Timofti said that it would provide solid biomass fuel to 25 kindergartens, gymnasiums and lyceums, which are endowed with modern Japanese boilers. „Besides the fact that it improves the study, work and living conditions in settlements, the project shows something important, namely that we may find alternative energy solutions, even cheaper and ecological.”

Nicolae Timofti thanked the Kiev-based Japanese Ambassador to Moldova Shigeki Sumi for the support provided to Moldova by Japan and, in this respect, handed over the official a  letter  of thanks addressed to the Japanese government.

For his part, Shigeki Sumi showed content with the 2 KR project and said that Japan would continue to be a devoted partner of Moldova and would back efficient projects and investments in Moldova.