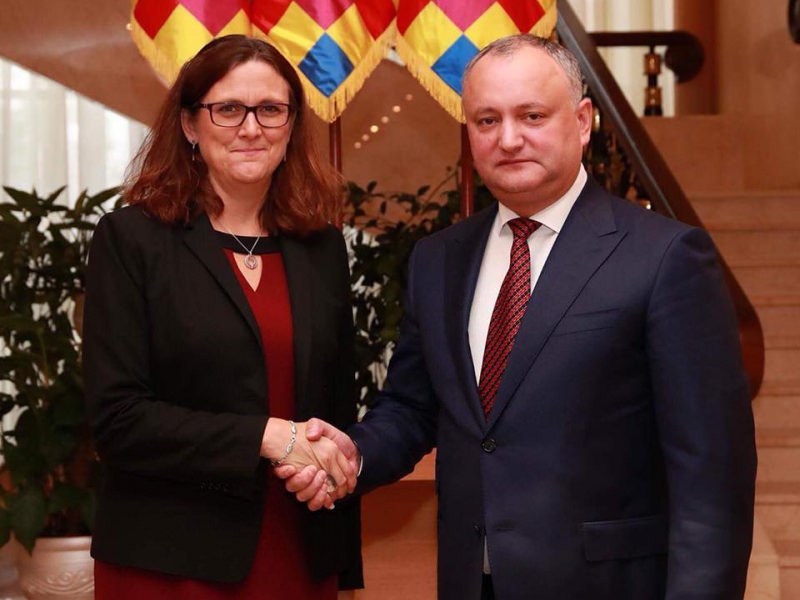 The Head of State welcomed the high-ranking representative of the European Union to Moldova, expressing confidence that this visit will strengthen cooperation between the Republic of Moldova and the EU in the field of trade. Also, Igor Dodon thanked Mrs. Malmström for assistance and direct participation in the process of abolishing the visa regime for Moldova during her tenure as EU Commissioner for Internal Affairs.

The President noted that the relations between the Republic of Moldova and the European Union continue to be strengthened, including in the field of economy and trade.

The European Union is an important trading partner of our country. In trade relations with the EU, there has been an increase in indicators both for imports and for exports.  But it would be desirable for the structure of exports to the EU to have more goods and services with added value for delivery to the EU market.

"I noticed that for a number of groups and categories of goods, it is necessary to revise the provisions of the Free Trade Agreement and return to the regime of autonomous trade preferences, to asymmetric trade with the EU.

This refers to agricultural products, more than 70 percent of which is currently supplied to the market of the Russian Federation and CIS countries, while the prospect of export to the EU market looks very weak.

The revision of precisely these provisions of the Agreement will allow us to achieve a significant increase in our internal potential, both production and export, " stressed the President of the Republic of Moldova.

The President asked the European Commissioner to raise some export quotas for Moldovan goods, which show an annual growth in demand in the European Union market.

Also, the head of the state applied for the preservation of the rules of trade with the EU in relation to Transnistria for 2018.

Igor Dodon stressed that he stands for a balance, primarily of economic interests of the Republic of Moldova, which are present both in the East and in the West.

The official expressed his confidence that the trade relations between the Republic of Moldova and the European Union will be strengthened and developed in the interests of both sides.