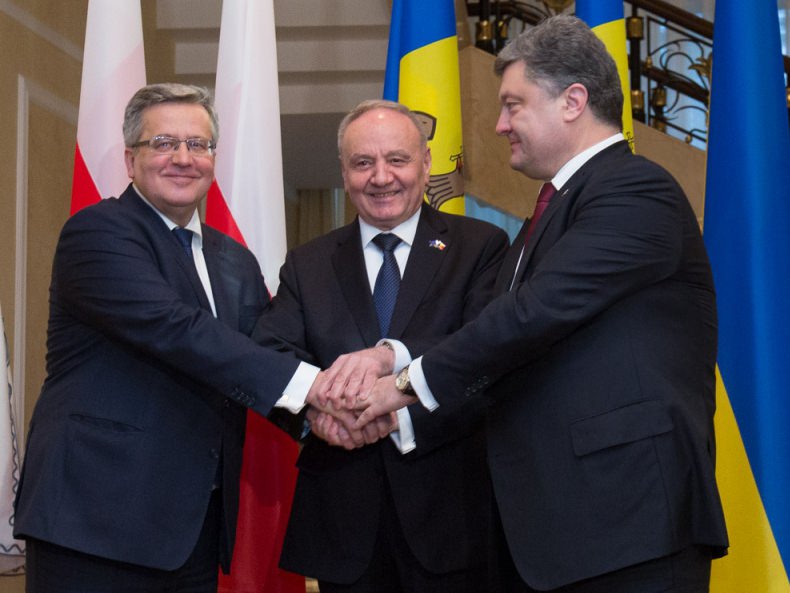 The two officials were met by Timofti during an official ceremony at the state residence.

Timofti, Komorowski and Poroshenko held a trilateral meeting, afterwards they participated in a plenary meeting of the delegations of the three states.

Timofti voiced satisfaction with the fostering of the friendship ties between the three countries, based on the values of the European Union.

Bronislav Komorowski praised the progress recorded by Moldova on the European integration path, which positioned it on the top of the Eastern Partnership states, and welcomed the ratification of Moldova-European Union Association Agreement by the European Parliament. The official specified that the Polish parliament would ratify the above-mentioned accord by the end of 2014.

Petro Poroshenko said that the 30 November parliamentary election in Moldova were crucial for the stability of the entire region. Poroshenko voiced hope that the Moldovans voters would confirm the European development option of Moldova during the polls.

Poroshenko showed that, after the parliamentary elections, the Moldovan-Ukrainian economic ties would boost.

The three heads of state held a joint news conference, during which Timofti made the following statements:  (video: https://www.youtube.com/watch?v=8qxA9LcZS68)

First of all, I would like to thank my Ukrainian and Polish colleagues for that they came to support Moldova in this autumn decisive for Moldova. Your visit takes place in the context of the actions of commemoration in the Central and Eastern Europe on the 25th anniversary of fall of the Iron Curtain.

Today, I had the possibility to discuss in a very friendly environment, by the way in a trilateral format new for us, issues referring to cooperation between our states, European agenda, as well as the latest regional evolutions.

During the talks, I found out with satisfaction that a more positive and dynamic friendship and cooperation ties was enhancing between Moldova, Ukraine and Poland.

We addressed items regarding the development of the political dialogue and direct contacts, prospects of settling conflicts and strengthen peace and security in the region, interaction between out states and mutual support within the regional initiatives and international organisations.

We also approached opportunities to deepen cooperation in the economic and humanitarian areas, especially to foster energy security, modernise border infrastructure with the European Union's support.

I would like to emphasise Moldova's firm position towards the territorial integrity of Ukraine, for the democratic path and pro-European and democratic option which the Ukrainian nation reconfirmed during the recent parliamentary elections.

We are solidary with the Ukrainian nation and leadership in this difficult period. Ukraine's success is into the national interest of Moldova.

All those three countries share the same European values and Poland showed that it backs us by concrete actions and projects, in order to consolidate these values, implement reforms on modernisation important for our fundamental goal to join the European Union.

We are confident that we will further benefit from the valuable support of Poland and other EU member states, in order to achieve the European destiny of Moldova and Ukraine.

We exchanged views with Presidents Komorowski and Poroshenko about the Transnistrian conflict settlement.

Ukraine continues to be a very important actor in this process. The dialogue on the political solving of the Transnistrian conflict must be more dynamic and we count on Ukraine's support in this respect.

Thank you for your solidarity and assistance. You are welcomed to Moldova!".

Asked by journalists to comment on the efficiency of the Moldovan authorities’ spending of the European funds, Polish President pointed out that the role of public opinion and strengthening democratic institutions were crucial to combating corruption.

President Petro Poroshenko said that the Ukrainian people unreservedly chose rapprochement with the EU during recent parliamentary elections. "I say there is no alternative to European integration", said the Ukrainian president.

Petro Poroshenko said that the common European course of Ukraine and Moldova would facilitate the Transnistrian conflict settlement and cooperation in the field of security.

The Ukrainian president said his country was the victim of an armed aggression by Russia and stressed the importance of compliance with the Minsk Agreement on the cessation of hostilities.

President Timofti today presented Bronislav Komorowski and Petro Poroshenko with the highest distinction of the state, the Order of the Republic for their contribution in the development and deepening of the friendship and cooperation relations between the three countries and for the constant support for Moldova's European integration path.