Moldovan president: I am glad, similar to all our citizens who live with sense of freedom, independence 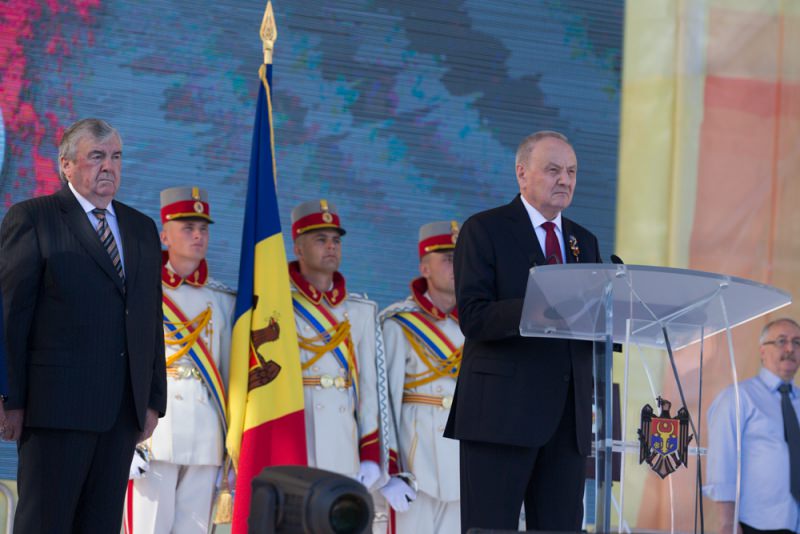 On the occasion of the 25th anniversary of Moldova's Independence. President Nicolae Timofti laid today flowers at the monument "Maica Indurerata" (Grieving Mother) at the memorial Eternity Compound and at the monument to Stefan cel Mare ruler in Chisinau.

After the ceremonies of laying flowers, the Head of State declared for press that he was happy, similar to all Moldova's citizens who have a sense of freedom and independence.

At the solemnity, the President of Moldova, Supreme Commander of the Armed Forces, together with Defence Minister Anatol Salaru handed from his part special marks (Commemorative coin - "25 years of Independence of the Republic of Moldova") to parade units commanders, as a high appreciation of their merits.

In his square speech, the president spoke about the achievements and challenges that have existed from Moldova's independence and made a call to unity and cohesion of societal national interests of Moldova's European integration.

We hereby present the speech of President Timofti:

Today we share a solemn day, a historic day, full of meaning and fulfillment. The Day of 27 August is our country's Independence Day. The Republic of Moldova, is an eloquent proof that, in the decisive and essential for the fate of this land, we were able to mobilize to make the right decisions, to live up to present times. Twenty five years ago, hundreds of thousands of people here in the National Square, and in Parliament, expressed their desire to be free. 27 August 1991 was a culmination of the struggle for national liberation that took until then our cultural elites, along with numerous other worthy and hearty patriots.

Today, we pay homage to these patriots who later on Dniester, defended by force of arms independence and sovereignty of Moldova. Some national heroes left this world, but we are here to carry forward their aspirations. We have not lost that freedom desire, but we understood from then, that freedom and rights are not gifted, but are obtained through struggle, hard work, unity and sacrifice.

In these 25 years we tried to find our way, to organize our society and lives as we realized and knew better. We won both national and international victories , being proud and happy. But we recorded not just successes. We made mistakes. During this period we had to deal with Russian involvement in our internal affairs, a war with Russian 14th Army in Transnistria, numerous trade embargoes imposed by the Russian authorities. We went and go through internal difficulties and upheavals searches.

Today, on this sacred day to us, I will say that many of the answers to questions and our aspirations are found in Declaration of Independence, the fundamental document, along with the Constitution, is and must be our starting point in all actions and decisions substance, our essential book. Moreover, I would say that many of the hesitations of the last 25 years are because sometimes we ignored some provisions of Independence Declaration. The democratic trend and our European destiny, in my opinion, can not be questioned and have no alternative.

In search for a suitable development for Moldova, we altered proper alignment of things. We could learn from such political experience, even today, when we notice nostalgia for Soviet times, painted in newest Eurasian colours.

Moldova faces a lot of challenges but also opportunities. One of our achievements is undeniable that we have taken important steps towards integration into the European family.

Our proximity to Europe is facilitated and driven by  conclusion of the European Union Association Agreement and visa liberalization. We are the only in CIS who can travel freely in Europe. These documents open ample opportunities to trade, education, free movement of goods, technologies and people, the creation of joint projects under European auspices. We must seize the opportunities offered, to understand that this is our chance to modernize ourselves.

Disappointments must not stop our European road. But things take a positive turn, it is essential that we change some things. The reforms, some of which have remained only on paper, must be visible to all. Politicians and officials working for the people, as their mission is. Judges and prosecutors must give yield to merit privileged status offered by the society. The political class and the important institutions of the state will still have a deficit of trust from the people, as long as major bank fraud in recent years will not be elucidated. I encourage law enforcement institutions to do their utmost to increase investigations in this regard, the outcome of which depends on the respect and trust of citizens to state that we need for international partners.

A society in which man can achieve the best will be attractive not only for foreign investment but also for our fellow citizens who work abroad and who expect us, to give concrete signals that they can return to their motherland, because the supreme value of a country is represented by its people. Only with such an attitude towards people's hope we will replace disappointment and sadness with hope and optimism. If we give positive messages, we will strengthen national potential and will further expand relations with our traditional partners and friends. I am referring to European Union countries, Romania, primarily the United States and other countries that have supported us so far. We must know and appreciate the support of friends.

We proved over the past years, that Moldovan citizens by birth and European by definition, are imbued with the European spirit, vision and reflexes were European, and while this mentality produces results. Here, at home, we can build a solid politico-administrative system for people and independent institutions, which operate according to the law.

An addition to organization will be right. We all must want these things to happen and then nobody can stop us from our determination. So our efforts will make sense.

Difficult times in which we live, the East turmoil and problems in Europe worry us. But what we understand of the events taking place in Ukraine, Syria, Turkey and other uncertain areas, is that we must take precautions in order to be ready for any challenge. Moldova's independence and security of its citizens are not complete as long as foreign military forces are on our territory against our wish. Under these conditions, we remain separated from our fellow citizens from Transnistria.

Our citizens' security, information security, state security are resorts with which to manifest full attention. In this regard, we understand that we must have strong institutions, non-corrupted, to face any contingency, to put order in the broadcasting space, we do not control it completely at present, to increase educational activities, hoping that one day we will speak one voice when about our national interests. Remember a simple truth: no one will come to make order in our country, we are the only ones who are in charge.

Our entire gratitude is directed today to those who work for Moldova to become a prosperous country. Teachers, doctors, farmers, soldiers, policemen, businessmen, students, civil servants: to you all I express sincere thanks and cordial congratulations on the occasion of Independence Day.

"Happy Birthday, the Republic of Moldova!"