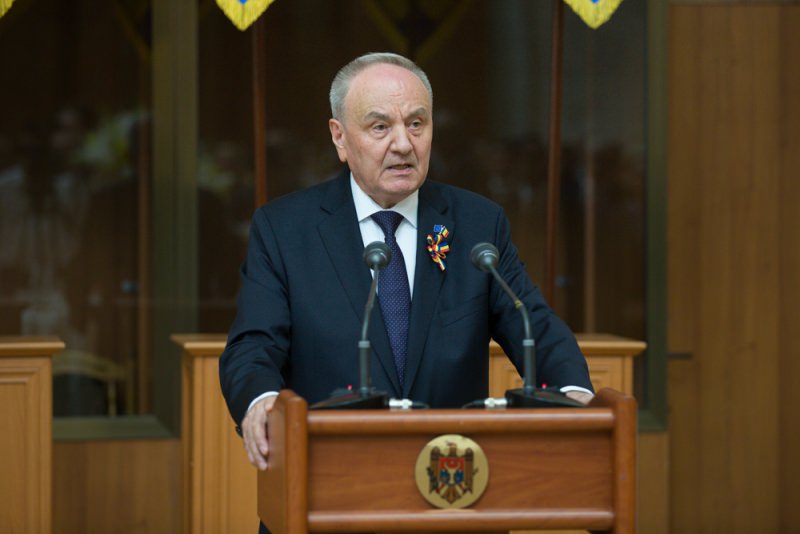 Moldovan President Nicolae Timofti, offered on 27 August a reception on the occasion of Moldova’s 25th anniversary of Independence.

Nicolae Timofti presented his speech in the opening event:

It is an immense pleasure for me to be here today next to you in a historical context occasion of an anniversary – 25 years of Independence of the Republic of Moldova, 25 years since we broke definitively dictatorial past.

On behalf of the people and on my own, I express our deep appreciation and gratitude for the dedication and the whole implication that you had and have in shaping the past, present and future of Moldova.

The Declaration of Independence, signed by 278 MPs of the first democratically elected Parliament, also called by us the Parliament of Independence, inspired generations through the lesson of political will, courage and civic patriotism that it presented then. The historical document, which placed us as a state and national identity, had laid the state foundation stone that would fortify, but also justify their right to be on the world map.

After 27 August 1991, we found the democracy and freedom forces in the world. This is the greatest conquest of a people which enlisted without its will, into the Soviet dictatorship empire, had to deviate from historic identity and then to deplore sons exiled in ice Siberia of the communist regime.

Thus, today, it is assimilated, primarily the recovery of national identity and dignity, crystallized the essential symbols of state – Anthem, the Romanian language, Tricolor, Constitution. We paid a high price for freedom and independence, and democracy got to be a reward for all the suffering that we had had so far – deportations, humiliations, the Nistru war. Democracy trust in everything that we can provide it, if politicians know how to do politics in the society interest, but their personal, guaranteeing respect for law and state institutions. This is supposed to be good example for our whole society.

After committing the Act of Independence, joining the Council of Europe and the United Nations, another great victory of our people was signing the Association Agreement between Moldova and the European Union. Approaching the European family, where we belong undeniably, it is the greatest guarantee of the independence and prosperity of Moldova, while EU integration must be a common and prospered dream.

Our irreversible path to Europe would not have been possible without the constant support of development partners. Taking advantage of the solemn occasion, when history makes felt its presence, I should like to bring sincere thanks, on behalf of people and on my own, to those present in this hall, states that encourage us and support us in our aspirations, throughout different methods of Europeanization and modernization.

Citizens' welfare, prosperity of Moldova as a state are unthinkable without the support of development partners and the European Union's strong shoulder.

Today, we cross a backdrop of worrying developments on the regional and international security dimension, but also changes in its political system. We expect elections in autumn. Thus, now more than ever, the country needs the wise and upright leaders.

Solidarity between people and its leaders, active involvement of civil society are the main goals of a healthy democracy.

In our state evolution, we will enhance political and trade-economic dialogue with West and East. At the same time, everybody is aware, that Moldova will continue the European path and it must be the most visible focus of national and foreign policy. I am firmly convinced that together we can capitalize on all choices the European family, free and united Europe offers to us.

Arriving at this time, quarter-century in the history of the state, we are obliged to look forward to the future, let us review what we managed to achieve so far – Democracy – which is the most beautiful art of governance. Our strength is in our joint efforts to make the country stronger, to become worthy and respected in the world.

I extend my warmest thoughts, accompanied by sincere good wishes to all Moldovan citizens, wishing them good health, happiness and growth in everything they propose. The Moldovan citizens are eager to live in a prosperous and safe country. I believe that the citizens’ desire of progress must be foundation of our actions, so achieving this goal depends on each of us. Our duty is to leave for future generations a better and a more prosperous country.

I invite you to raise the first toast for the Republic of Moldova and, please, make yourself home!"