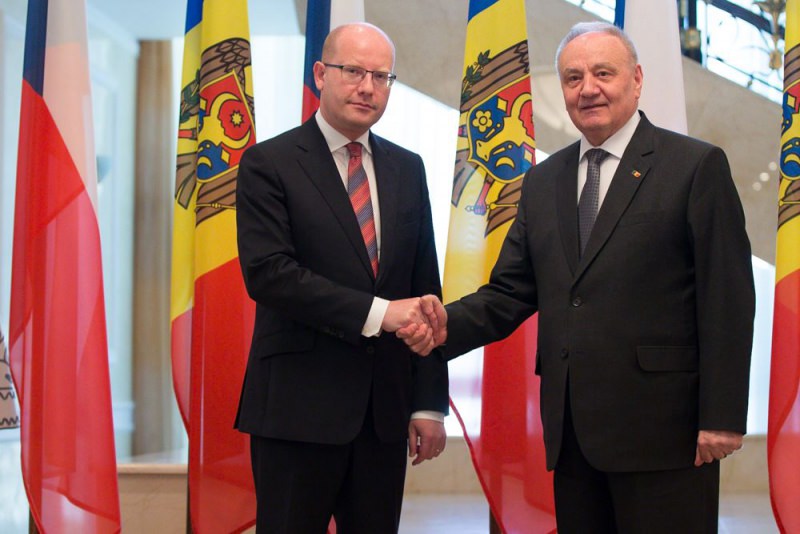 The head of state welcomed the visit by the Czech PM and the thanked the Czech Republic for the constant support provided to Moldova in efforts to implement the European agenda.

The Czech prime minister expressed his country’s willingness to share from the Czech experience in terms of European integration.

“Three countries of the Eastern Partnership (Moldova, Georgia and Ukraine) have a special relation with the European Union. The Chisinau authorities must continue the reforms and provide a functional legislative framework for implementing the provisions of the Association Agreement between Moldova and the European Union,” the Czech PM said.

Also, Bohuslav Sobotka highlighted the importance of the signing of an agreement with the International Monetary Fund, which would represent a positive signal for foreign investors and would create prerequisites for Moldova’s economic progress.

At the meeting, the two officials tackled the Moldovan-Czech economic relations, stressing the need to boost the trade changes between the two countries.

Attending the meeting, Czech Minister of Industry and Trade Jan Mladek said that the Czech Republic was the main importer of Moldovan wines from Europe.

A special subject of the dialogue represented the Transnistria-related issues.

President Nicolae Timofti referred to Russia’s interest to maintain its influence in the zone as a serious impediment to Moldova’s rapprochement with the European Union.

“Transnistria was the first experiment of the Kremlin before the Ukraine crisis, to strengthen its power of geopolitical influence at the borders with the European Union and North Atlantic Alliance member states. Also at the five-plus-two negotiations, Russia continues backing the Tiraspol authorities in promoting separatism. Moreover, breakaway policies are attempted to be promoted in north and south of Moldova,” the president said.

In this context, the head of state stressed also the impact of the flow of propagandistic information, managed by Russian TV channels, which are numerous in the local media space.

Referring to the sanctions imposed on Russia by the European Union and the United States, Nicolae Timofti said they were adequate to the situation.

The Czech prime minister is accompanied by a group of business people, who will promote the “economic diplomacy” between Moldova and the Czech Republic.