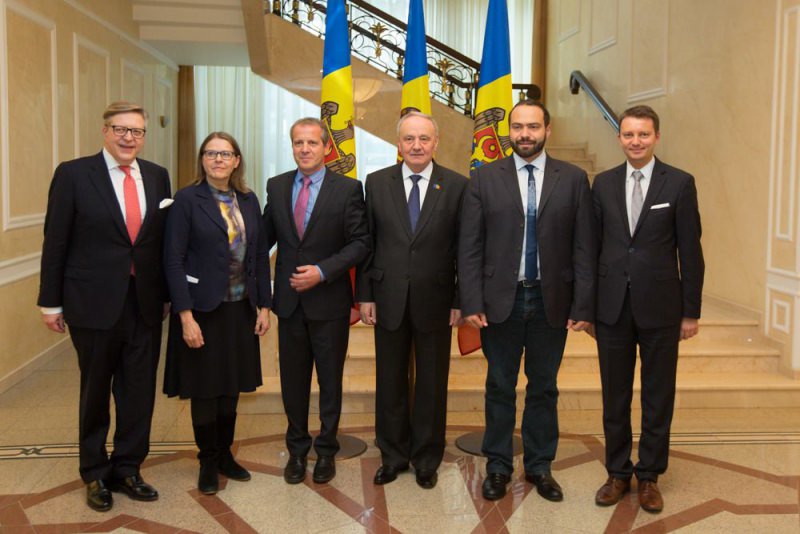 President Nicolae Timofti today received a delegation of the European Parliament. The delegation, led by Igor Šoltes, is on a visit to Chisinau on a mission of monitoring the presidential elections due on 30 October, the presidential press service has reported.
The delegation is also made up of Siegfried Muresan, Heidi Hautala, and Fabio Massimo Castaldo.
The head of state welcomed the visit by EP representatives and thanked for the support provided by this formation in the European Parliament to the files concerning the pro-European course of Moldova.
The sides exchanged opinions on the carrying out of the present electoral campaign, as well as on the role of the media in the electoral process.
President Timofti said the head of state had no right, under the Constitution, to get involved in the campaign. He said that some candidates for the Moldovan president office made statements exceeding the prerogatives given by the Fundamental Law.
“Despite the criticism launched against me, I have promoted, in my mandate, the principle of independence of the presidential institution. I did my utmost, in the circumstances in which I worked, to promote the national interests of Moldova,” President Nicolae Timofti said.
For their part, the delegation members stressed the need of the holding of fair elections and reiterated EP’s backing for Moldova. In the context, Igor Šoltes highlighted the role of the president in the democratic process.
In the end of the meeting, the EP delegation thanked President Timofti for acting with wisdom and promotion of pro-European ideas.