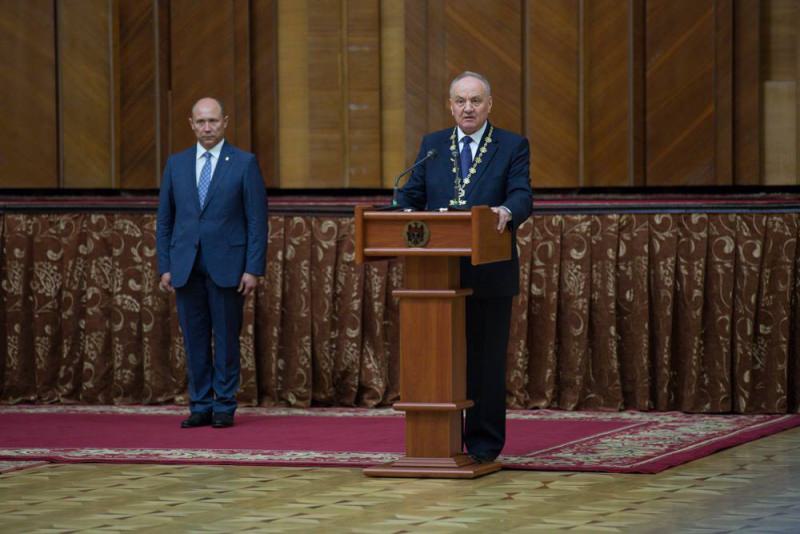 The members of the new government took oath at the Palace of the Republic today, in the presence of President Nicolae Timofti.

During the Strelet government's swearing in office ceremony, Timofti delivered the following speech:

We have before us a new beginning.

A new government is ready to take over Moldova's tasks, which it is to manage such a way that to bring peace in society, to attenuate social differences and to re-establish contacts with international development partners.

It has to be highlighted the fact that a new government was possible due to moderation and capacity to correctly understand things, which the pro-European parties, namely the Liberal Democratic Party, Democratic Party and Liberal Party, have shown.

In general, these political formations acted as their mission was provided to them by vote of people, putting aside differences that separate them and acting logically and naturally, when creating a European Integration Alliance.

It follows, as I said, a period full of responsibilities and provocations, which we have to face together.

The precise and consistent implementation of the Association Agreement with the European Union is an absolute priority.

Implicitly, more projects, which are under way in various fields, from the social to the energy one, should be resumed and implemented.

Step-by-step, we will put Moldova on the path, which to ensure the well-being and stability in society.

Each of you, ladies and gentlemen ministers, has to show performances in the sectors you are to manage.

You have in the person of president a supporter of all efforts, which to lead to achieve goals of national interest.

I ask you to find solutions in order to help those in need, on whom the burden of increased prices to gas and power, and not only these, presses. We cannot let them to face on their own these difficulties.

Initiated reforms should to be continued. In justice, education, economy and in other sectors. The parliamentary majority has the duty to back the government's initiative, which fit into the process of European reforms, and, thus, it will be ensured that natural cooperation that has to be between the executive and the legislative powers.

I wish you every success on this path. Work for people and people will support you.