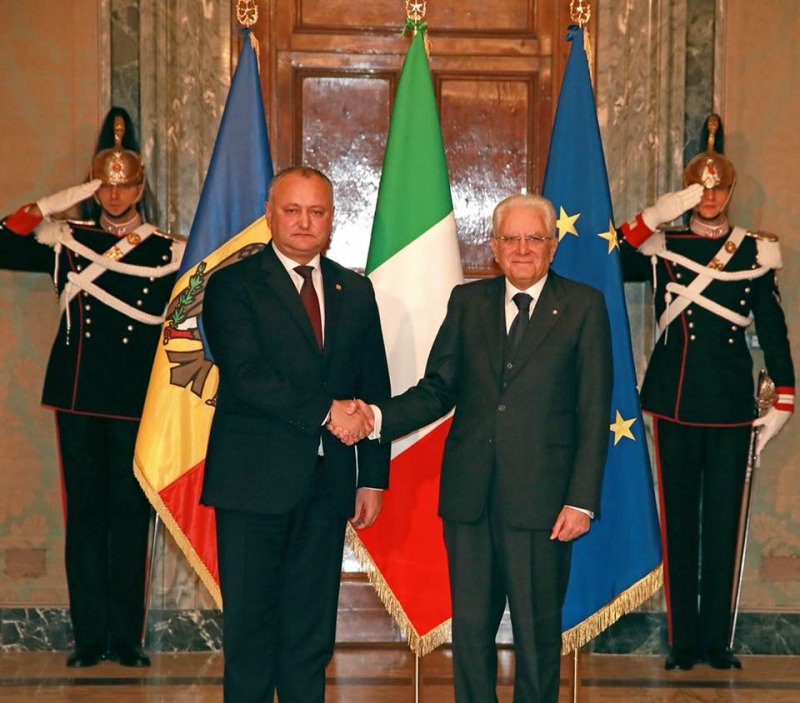 President Igor Dodon has had a meeting with President of Italy Sergio Matarella.

The sides tackled more aspects of the Moldovan-Italian relations.

According to a press release by the presidential institution, Igor Dodon said that Italy is one of Moldova’s basic partners. This year, we mark the 25th anniversary of the establishment of the Moldovan-Italian diplomatic ties. In the context, the head of state spoke out for strengthening and extending the bilateral relations between both countries in all sectors of common interest.

The president of Moldova welcomed the fact that Italy would take over the OSCE chairmanship in 2018.

“We will support efforts of the Italian chairmanship in this organization, especially as regards the settlement of long-lasting conflicts. In our opinion, OSCE should remain one of the principal guarantors of peace and security in Europe. I voiced confidence that Italy would back Moldova in the settlement of the Transnistrian conflict and hope that, under the chairmanship of Italy, in 2018, new rounds of five-plus-two talks would be organized, which will contribute to advancement in the concerned field. We will be glad to welcome the new OSCE chairman, Foreign Minister of Italy Angelino Alfano in Moldova,” Dodon said.

Igor Dodon welcomed the work of the honorary consulates of Moldova in the Italian cities of Florence, Ascoli-Piceno and Bari.

During discussions, the Moldovan president thanked the Italian side for the efficient cooperation in more sectors, such as: social infrastructure, migration, agriculture, education, scientific researches, etc.

”I mentioned that the trade and economic relations between Moldova and Italy are developing continuously. As for the volume of commerce, Italy ranks third among Moldova’s partner countries. About eight per cent of Moldova’s trade is carried out with Italy. Italy is on the second position according to the investments in the Moldovan economy. As many as 1,350 enterprises with Italian capital work in Moldova in more sectors, such as the banking one, working out software, production and processing of leathers, processing iron for the construction industry, etc. This cooperation contributes to the creation of new jobs in Moldova,” the Moldovan president noted.

In the context, Igor Dodon highly appreciated the organization, in Chisinau, of traditional economic forums for Italian enterprises and joint ventures working in Moldova. The fifth forum of this kind took place on 4 October this year. Also, the Moldovan president praised the inauguration of the Moldovan-Italian Chambers of Commerce and Industry in Turin, Treviso, Ascoli-Piceno and Barlette. At the same time, Dodon urged Italian companies to participate in the activity of free economic zones, industrial parks from Moldova and showed interest in the Italian experience as to financing measures of social assistance for residents.

The Moldovan head of state made a request to the Italian president to contribute to the settlement of problems faced by the Moldovans settled in Italy. In particular, in order to speed up the signing of an agreement in the field of pensions and social protection, recognition of the education titles of Moldovans from Italy, as well as other issues discussed with fellow countrymen from Italy.

The president of Italy accepted the invitation of his Moldovan counterpart to pay an official visit to Moldova in the near future.