Moldovan president gives state awards to mothers with many children 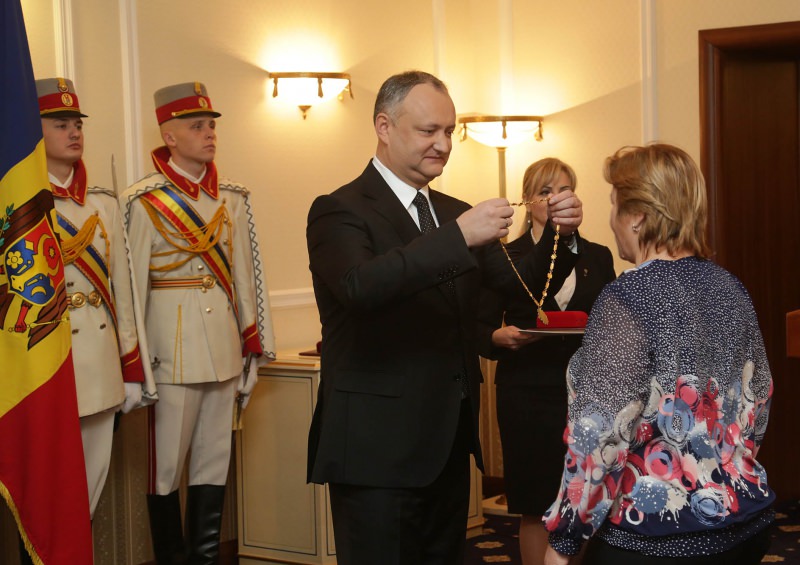 As such, as sign of high appreciation of their special merits in strengthening family institution and substantial contribution to the creation of socially responsible families to ensure physical education, spiritual and moral development of children and their harmonious development, "Ordinul Republicii" (Order of the Republic) was awarded to: Lidia Tertiuc, mother of eleven children and guardian of six children, Nisporeni town; Valentina Vihodet, mother of seventeen children, Doina village, Cahul district.

In his speech to large families, present at the ceremony, Igor Dodon said:

"I decided to hand in today the first state distinctions as the President of the Republic of Moldova.

Some will comment that awarding of such distinctions as taking place too quickly. But, I think that we do it with great delay. I believe, that it is high time to encourage through special mentions and financial support the families with many children in our country.

I can wait with handing in the awards. But these nice families should not wait. That is why, I decided that now, on the New Year eve and in the middle of winter holidays, to hand in state awards to four families with many children. Two Orders of the Republic and two Orders of Honor. They truly deserve these distinctions.

I want to remind you that Moldova suffers from a very serious demographic problem. We actually slip into a demographic collapse. In Moldova, 50 per cent of marriages end in divorce. In other words, every second family falls apart. The birth rate is lower than mortality, especially in villages and districts. There are villages where during a year not a child was born. And many children are brought up without parents, without basic educational and family life, without family values.

In this context, the more are appreciated those parents who had the courage and found the energy to bring up more than ten children in their families, some of which were adopted. Such families are a model of Christian tradition, a model of paternal love, a model of patriotism. That is why, I decided that the first state awards to be offered by me as president to be, certainly, to some of these families, we need to appreciate them all.

I believe that some national programs are needed, so that to restore the confidence of citizens in their own country, to reverse the demographic trend, strengthening traditional family values, of attracting and retaining young people in the country. As president, I will encourage the launch of such programs or I will support the existing ones if they show their efficiency. And, I will promote my presidential initiative that we announced earlier, maternal capital".