Igor Dodon had a working meeting with David Hale, USA Under Secretary 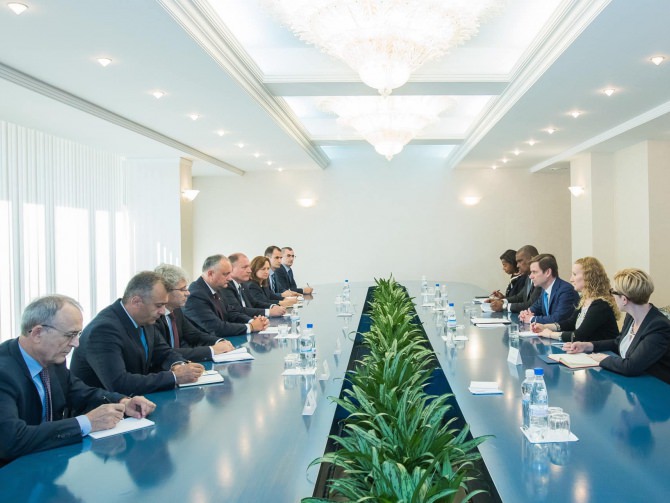 President of the Republic of Moldova, Igor Dodon, had a working meeting with Mr. David Hale, State Under Secretary for Political Affairs of the State Department of United States of America, who is in a visit to our country.

Officials discussed divers aspects of the strategic dialogue evolution. The Head of State thanked American party for the financial assistance and valuable support accorded to the Republic of Moldova in different areas during 27 years of the independence.

During the discussion parties marked a successful implementation of important projects such as “Millennium Challenges” launched in 2007-2009 as well as our interest in continuing similar projects with US support.

In other words, Igor Dodon highly appreciated United State’s support in finding solution for the Moldovan political crisis and assuring peaceful transfer of the force from the former government. As well, President of the country reiterated that with the support of external partners and an internal national consensus Republic of Moldova has all chances to relaunch economics and promote balanced external politics based on its own national interests.

Igor Dodon assured US Under secretary that Presidential Administration, Government and Parliament majority will carefully sustain all of the international agreements signed by Republic of Moldova, including those with European Union. The Head of State appealed to the US to support our efforts to strengthen the internationally recognized status of permanent neutrality of our country.

Igor Dodon discussed with Mr. Hale perspectives of the Transnistrian problem settlement. President of the Republic of Moldova mentioned that we continue to highly appreciate perspectives of the prosses in 5+2 format and USA role and other participants of the negotiations.