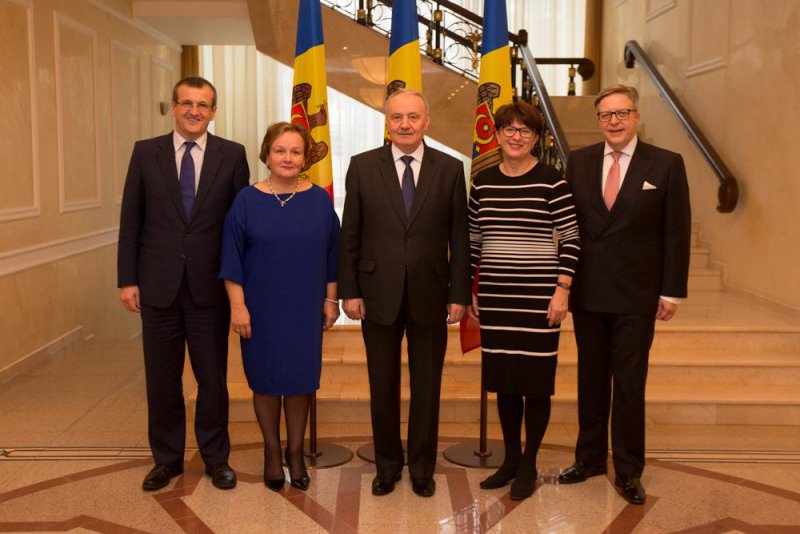 Moldovan President Nicolae Timofti, received today at the State Residence, a delegation of Members of European Parliament, members of the European People's Party (EPP), are in a pre-election monitoring visit in Moldova.

The delegation consisted of Sandra Kalniete, vice-chairman of the EPP Group in the European Parliament, Cristian Dan Preda, EPP coordinator in the Committee on Foreign Affairs and Laima Liucija Andrikienė, a member of the International Committee of Commerce.

The head of state welcomed the visit of the European Parliament and expressed confidence that the presidential elections at the end of this month would be conducted fairly and democratically.

Also, President Timofti expressed concern about the information received, including in media, on external intrusions in this election campaign, both in the information, as well as through grants.

The Members of European Parliament were interested in what extent people on the left bank would be able to participate in the presidential election, the president highlighting the lack of alternative sources of information on the programs of candidates for local inhabitants.

"For our citizens from Transnistria, there will be open, like the previous elections, polling stations on the right bank. We have, however, no guarantee that the Tiraspol authorities will not restrict, by various means the right to express their voting option," said President Nicolae Timofti.

Regarding the Diaspora vote, the president said the electronic method would be the best solution, but for now this procedure may not be applied.

Sandra Kalniete, the leader of the delegation, stressed that this election to be important for the reputation of the Republic of Moldova, being pursued by the European institutions and international lenders.

President Timofti expressed optimism that Moldovan authorities would not temper efforts to implement the provisions of the association agreement with the European Union, so that, in the near perspective Moldova to obtain the status of a candidate country.