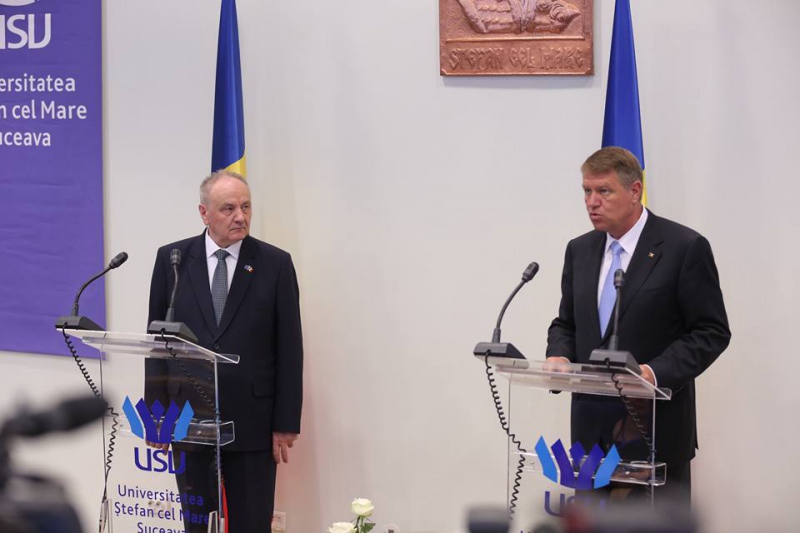 Here is a joint press statement of the two presidents:

I am glad and quite excited to be here today with the president of Romania, in Suceava, at the historic citadel of the ruler Stefan cel Mare.

Also, I am honoured by the title of Doctor Honoris Causa of the Stefan cel Mare University and thank the academic community for awarding me this honour.

Today, we had a very useful and meaningful discussion with President Iohannis on important issues for citizens from both sides of the Prut River and for our strategic, brotherly and special relation.

Our political dialogue is still solid and constructive. Together with President Klaus Iohannis we reached a full understanding of the regional situation that worries me, in particular, for the obvious reason that the events of the past two years have been influencing the development of Moldova and its European course.

It is important, in my opinion, to coordinate our views on concrete realities and the historical moment that we experience.

Thus, we exchanged opinions on security issues in the region and the Transnistrian conflict settlement.

We also had opportunity to discuss numerous joint projects at different stages of implementation.

On 27 April,  we marked five years of the signing of the Joint Declaration on the Establishment of a Strategic Partnership between Romania and Moldova for European Integration of Moldova.

We currently have a positive assessment of the bilateral cooperation, focusing on the European integration process and energy, education and social projects.

These projects will help deepen democratic reforms in Moldova, strengthen the rule of law state and an independent justice system, fight corruption, modernise state institutions and edify a fair and competitive economic environment.

By joint efforts, we are to expand the area of cooperation particularly in the field of development of infrastructure projects that would a full connection of Moldova to the European energy market.

Among other things, on the cross border dimension, we would like to expand the Mobile Emergency Service for Resuscitation and Extrication (SMURD) project, rehabilitate the Stinca-Costesti hydro-plant and modernise border customs offices.

In the economic area, we have established a satisfactory trend of trade between the two countries, Romania being Moldova's main partner in terms of exports.

I thanked the Romanian President Iohannis for solid financial assistance Romania is providing to Moldova.

I wish a new government that would implement these plans be formed in Chisinau as soon as possible.

It was quite pleased to meet you again in Romania, four months after the visit that I paid to Moldova. I am very happy that you are here today in Suceava, at one of the landmarks of our common history to receive the title of Doctor Honoris Causa of the Stefan cel Mare University.

I have the satisfaction that I could discuss with President Nicolae Timofti several priority subjects related to our bilateral relationship and for Moldova. As I told you, Mr. president, we welcome the democratic way the local elections were held in Moldova, the vote of Moldovan citizens clearly reconfirmed their support for pro-European forces. This is a renewed mandate offered by the citizens to transform Moldova in the European spirit. We hope that a new, strong, stable coalition would be formed in Chisinau, able to consolidate Moldova's European integration and continue a fast reform process. In the current domestic and regional context, delays or hesitations are not beneficial. In our opinion, these are not just Romania’s or other European partners’ expectations, but first of all, these are expectations of the Moldovan citizens.

At the same time, I discussed with President Timofti the way the bilateral relation is unfolding. Romania continues to firmly back Moldova’s European integration and provides continuous support to this complex process of integration. At the meeting, we highlighted, as a matter of fact, the unitary, fully receptive and open relation Romania has always had towards Chisinau. The citizens of Moldova, not political figures and forces are in the focus of our approach. This is a result of a policy which has at its basis a sustainable consensus, which has remained unchanged during all the electoral cycles from Romania.

We stay the sincerest and closest partner of Moldova. Along with President Timofti, we shared the concern we feel about the developments of security in the region and especially their impact on the stability and integration of Moldova in the European Union. The present regional context, particularly the situation in Ukraine, requires, with much more need, the strengthening of the state institutions, consistent following of the pro-European political agenda, promotion of the reforms expected by citizens. In all this effort, Moldova may rely, as before, on the support of Romania.

The discussions were focused also on the importance to enforce the commitments assumed under the Association Agreement and Free Trade Agreement with the European Union. After the progress of the last years, the present period is one of consolidating the positions won in this way for Moldova. Chisinau has the chance to fruitify the commercial, institutional and mobility advantages, which resulted from the implementation of European standards and regulations. The effort should now go deeper, to the enforcement of the reform commitments, on which the  country’s modernisation in European spirit depends. The preparation of the next stage – the one in which we will be able to speak about providing the European prospect - is connected with the success of this step. The progress of Moldova’s European integration process deals, first of all, with Moldova itself. I assure you that you will always find a firm, active and reliable supporter in Romania. Thank you!